Our Super Reliable Internet Setup for Working on the Road 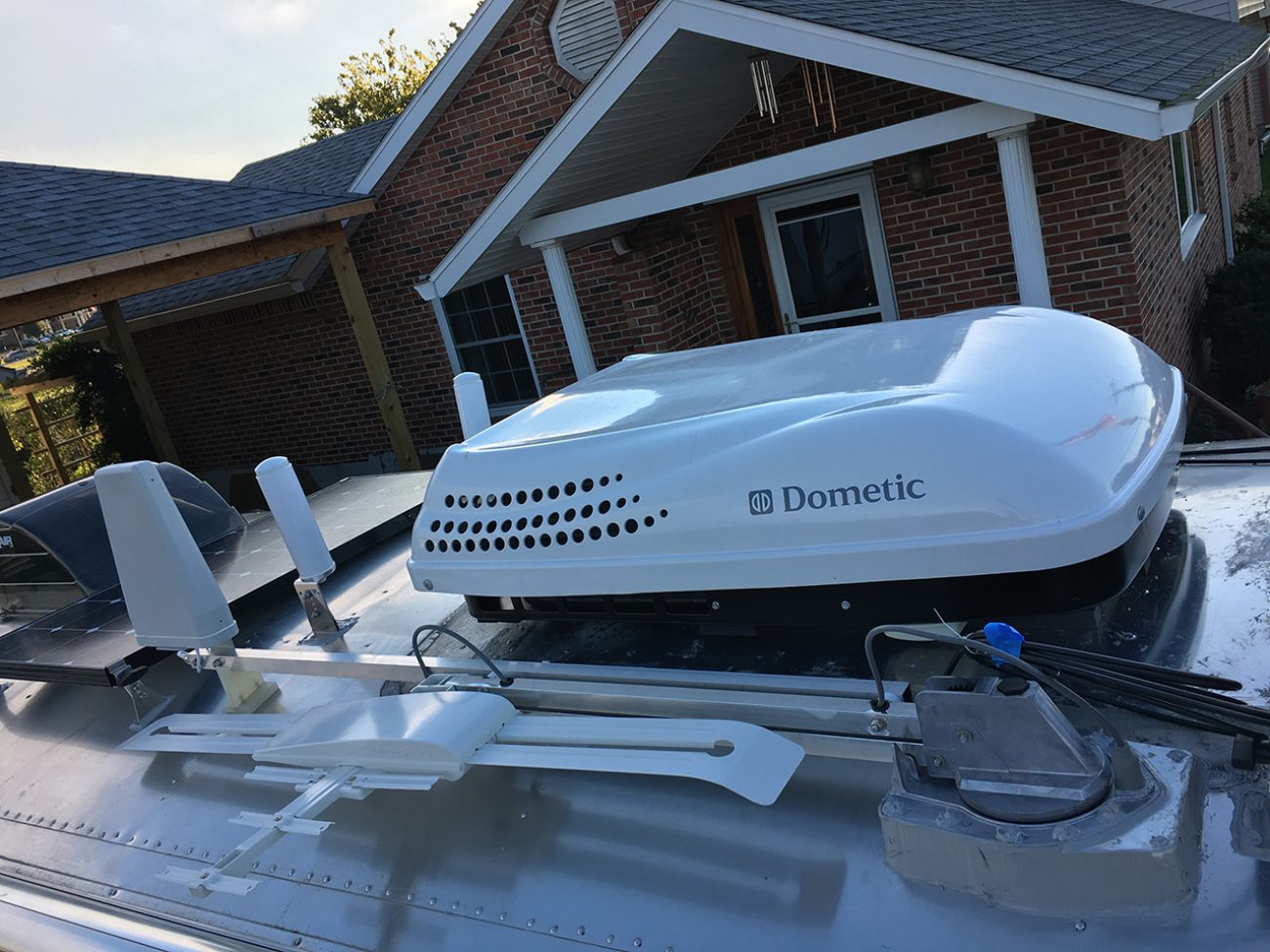 We get asked quite a bit about how we make money on the road. We wrote about that here, but there was one important piece of that puzzle that we didn’t address in detail because it required it’s own post.

That’s right, we’re going to talk about how we get reliable RV internet for full-time travel (and businessing) in your RV.

Need to save this guide for later?

Download this beautifully designed PDF of all the info in this article plus extra behind the scenes tips for installing.

It makes a great reference guide for buying everything you need or hooking it all up.

Before we get started, let’s get a few important items out of the way:

For maximum flexibility and stability, there are several things you’ll want to look for to have solid internet access. Below are the 5 major concepts plus a handy shopping list.

This may be the hardest part of the whole process. Buying gigs is expensive, yo. “But Jonathan,” I hear you say, “all the major carriers have unlimited internet plans now. Why you gotta be all apocalyptic about it?”

Read the fine print, kids. Nearly all of them slow you to a crawl after about 20GB. And by crawl I mean you’ll barely be able to check your email. Oh and that cutoff goes even lower if you’re using that data tethered - which you will be if you’re trying to work on your computer. The upside - I guess - is that you won’t get charged if you go over your data. The downside is you’ll only get to use it for a couple of days. Generally, Verizon is going to be your best bet coverage-wise especially if you’re out West. But I would recommend having at least two carrier plans just in case. We have AT&T for our iPhones (just switched to the Unlimited Plus plan - 22GB per line) and a Verizon plan (see below).

If you can snag one of the mythic Grandfathered Verizon Unlimited plans do it. No “network management” - i.e. throttling - and solid as a rock. Lately Verizon has been cracking down and trying to kill these so you’ll want to stay under 200GB/month so you don’t flag their attention. Shoot us an email if you're interested.

Otherwise, the landscape of plans changes so regularly that there's an entire site dedicated to keeping up. Here's a few that we've heard good things about (updated as needed):

You should invest in at least two major carrier plans so you have internet options. We've found from experience that there are definitely towns, cities and areas that favor one over the other. And in many cases we would have been without internet if we didn't have a backup plan.

The device your SIM card goes into is pretty important, too. It should allow a decent amount of wifi connections (if you want to skip the #5 router hardware), have antenna ports and USB tethering capabilities.

We recently upgraded to a Verizon MiFi 6620L (aka the Verizon Jetpack) and it’s much better than the others we’ve used. Up to 15 connections allowed, long lasting battery and that oh-so-important USB tethering. More on that in a bit. It's really a fantastic, rock solid unlimited hotspot.

We're also snagged the Netgear Unite Explore 815S AT&T hotspot as an add-on to our new Unlimited Plus plan while we explored Canada and Mexico. But it also treats the hotspot like an unlimited phone and doesn't throttle after 22GB like most other carriers. We regularly put 80-100GB a/mo on this hotspot and I think it works better than Verizon in most places. Sadly I don't think AT&T let this live for very long and we were lucky to get it when we did. Wouldn't hurt to ask them, though!

The biggest thing you have to watch out for with these unlimited hotspots is that they aren’t meant for full time use. So if you leave them plugged in all the time the batteries can swell and stuff starts getting weird.

When we renovated our Airstream I put in an internet kill switch that cuts power to the cell signal booster, router and hotspot. I flip it off each night so the battery can drain and get a bit of use.

This is where it starts to get fun.

WeBoost seems to be the go-to for most signal boosters. Their products are really reliable and they have a good spread of options for different levels. I’ll say this, though - I’ve tried a few cheaper models and if you need internet for work go ahead and spring for the upper models.

The Drive 4G-X has double the uplink output compared to the 4G-M - useful for grabbing signals much further away. The difference is night and day. The increase in upload speed, download speed and latency have proven totally worth the stress-inducing cost of the 4G-X. While not every place we’ve stayed has had blazing 30+mbs speeds, everywhere has been usable and that’s saying a lot compared to our previous setup.

If you got both directional and omnidirectional antennas you’ll want to keep both ends near the 4G-X where you can plug and un-plug depending on which one you want to boost with. A bit of small space acrobatics, but I don’t need to switch them often.

You’ll also get an inside antenna with your booster. Run this so that your Jetpack or hotspot is right next to it. Just recently weBoost came out with an RV version of the 4G-X that has a more powerful inside antenna that shouldn’t require such close proximity - but I haven’t tried it myself.

If you live in a tiny box - aluminum or otherwise - it’s really hard for wifi or cellular signals to get inside the RV to your devices. It’s even harder if you’re in amazing camping spots off the beaten path.

Having the right antennas combined with a signal booster box will really up your signal game. You’ll want to boost in two ways:

Thanks to some serious sleuthing by our friends at boldandadventurous.com this SureCall Wide Band Omni-Directional can be used for both 4G and wifi signals (and move signals both ways). We use one connected to our cell signal booster (see below) and one connected as an outgoing antenna from our wifi router so we can get signal outside the Airstream. We even use it when we’re driving so the kids can connect.

For your Directional, weBoost makes a great Wide Band Directional Antenna - the tricky part is that you have to be able to get it high enough to not run into interference - and you have to be able to point it. I installed an RV TV antenna mainly so I could mount the directional antenna to it. Those TV antennas raise up and down and rotate 360 degrees. Pick up a bar and some hardware and you should be good to go.

We'll cover cables in the equipment list at the end of the article.

A Router Made for Nomads

So this last step is optional. You could grab an unlimited data plan, a Jetpack and just connect everyone wirelessly to that. Nice, simple, clean. But we’re talking about working and making a living on the road (and traveling with more than 2 people) so I’m proposing a router should be added to your arsenal. We’ve been using the Pepwave Surf SOHO MK3 and we love it. Why?

You’re not always going to be connected via LTE. Sometimes there’s a decent wifi signal you’ll want to grab, and with more than one device logging them all into the new network would be a pain. A router massively simplifies this for my family of 6.

The Pepwave has built-in profiles for tons of devices and our Jetpack worked perfectly with it. Just plug your USB charging cable into both devices and you’ll be charging the Jetpack as well sending the data signal in a lossless way via the cable. If you’ve ever tried to connect a wireless router to a hostpot device and share that signal you’ll know how quickly that signal degrades and slows down. This keeps things nice and speedy.

Want to see who used 20gb last night? The Pepwave conveniently tracks all that for you, even giving you granular data for what hours the device downloaded or uploaded the most data. It helps track down automatic updates or random apps that are chugging data.

You may remember up above that we bought an antenna and cable that connects to our router. The Pepwave has screw-on antennas for spreading signal inside, but with the added external antenna (SureCall Wide Band Omni-Directional) it allows us to use our wifi outside of the Airstream and even on drive days.

Having everyone connect to our router before connecting to public wifi helps secure things a bit, but the Pepwave even has built-in support for VPN networks if you want to take it to another level.

Honestly, there’s a ton more options built into the box, but the reasons above were enough to sell me on adding a router to my setup.

If this all sounds a little confusing, here's a handy illustration of how it's all connected together: 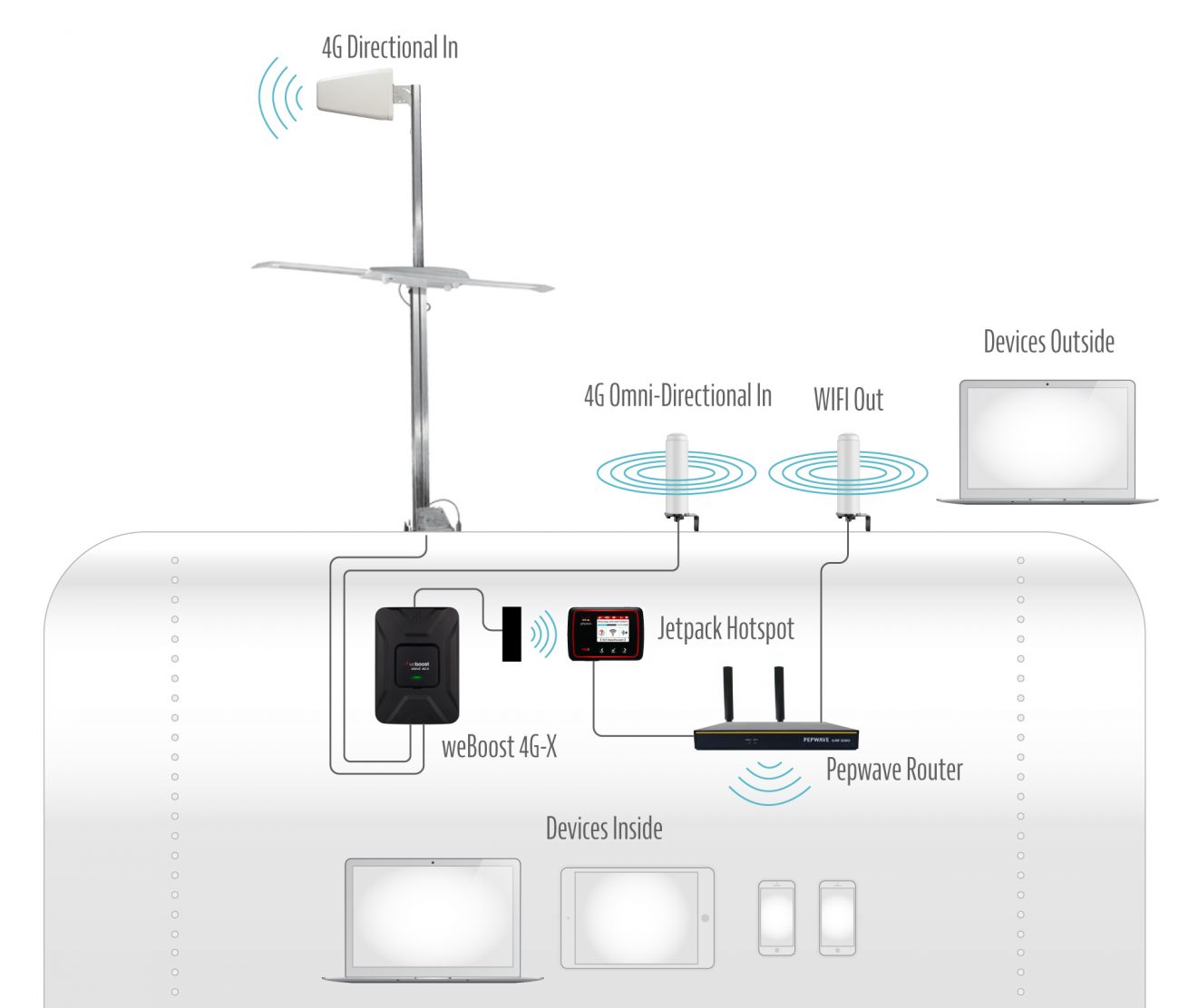 We’ve been using this setup every day for 4 months and we’ve been super happy with it’s speed, stability and connection. It’s world’s above our previous setup that included a Wifi Ranger, weBoost cradle booster and trucker antenna. I can count on one hand the number of times we didn’t have a strong enough cellular connection to get work done. And the majority of the time it’s not only strong, but crazy fast.

If you’d like this same setup in your RV, I’m listing everything we used down below. For cables, order the correct length to go from your antennas to your booster and router.

I've created a nicely designed PDF of all the info above plus extra behind the scenes tips for installing. Buy our internet setup guide for $10 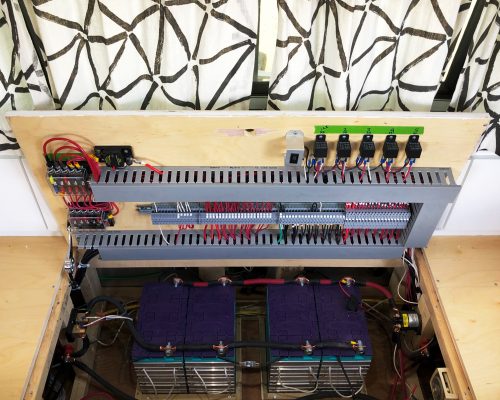